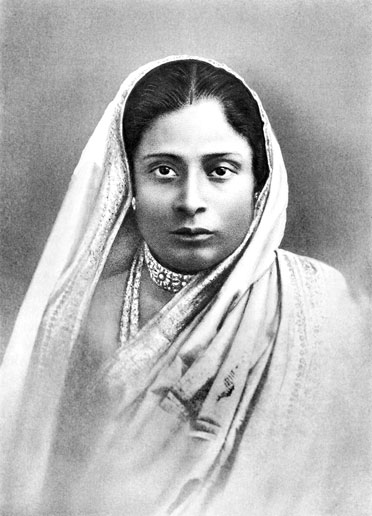 His wife was not the only woman disciple of Lahiri Mahasaya; there were hundreds of others, including my mother. A woman chela (disciple) once asked the guru for his photograph. He handed her a print, remarking, “If you deem it a protection, then it is so; otherwise it is only a picture.”

A few days later this woman and Lahiri Mahasaya’s daughter-in-law happened to be studying the Bhagavad Gita at a table behind which hung the guru’s photograph. An electrical storm broke out with great fury.

“Lahiri Mahasaya, protect us!” The women bowed before the picture. Lightning struck the book which they had been reading, but the two devotees were unhurt.

“I felt as though a sheet of ice had been placed around me to ward off the scorching heat,” the chela explained.

Lahiri Mahasaya performed two miracles in connection with a woman disciple, Abhoya. She and her husband, a Calcutta lawyer, started one day for Benares to visit the guru. Their carriage was delayed by heavy traffic; they reached the Howrah main station only to hear the Benares train whistling for departure. Abhoya, near the ticket office, stood quietly.

“Lahiri Mahasaya, I beseech thee to stop the train!” she silently prayed. “I cannot suffer the pangs of delay in waiting another day to see thee.”

The wheels of the snorting train continued to move round and round, but there was no onward progress. The engineer and passengers descended to the platform to view the phenomenon. An English railroad guard approached Abhoya and her husband. Contrary to all precedent, he volunteered his services.

“Babu,” he said, “give me the money. I will buy your tickets while you get aboard.”

As soon as the couple was seated and had received the tickets, the train slowly moved forward. In panic, the engineer and passengers clambered again to their places, knowing neither how the train started, nor why it had stopped in the first place.

Arriving at the home of Lahiri Mahasaya in Benares, Abhoya silently prostrated herself before the master, and tried to touch his feet.

“Compose yourself, Abhoya,” he remarked. “How you love to bother me! As if you could not have come here by the next train!”

Abhoya visited Lahiri Mahasaya on another memorable occasion. This time she wanted his intercession, not with a train, but with the stork.

“I pray you to bless me that my ninth child may live,” she said. “Eight babies have been born to me; all died soon after birth.”

The master smiled sympathetically. “Your coming child will live. Please follow my instructions carefully. The baby, a girl, will be born at night. See that the oil lamp is kept burning until dawn. Do not fall asleep and thus allow the light to become extinguished.”

Abhoya’s child was a daughter, born at night, exactly as foreseen by the omniscient guru. The mother instructed her nurse to keep the lamp filled with oil. Both women kept the urgent vigil far into the early morning hours, but finally fell asleep. The lamp oil was almost gone; the light flickered feebly.

The bedroom door unlatched and flew open with a violent sound. The startled women awoke. Their astonished eyes beheld the form of Lahiri Mahasaya.

“Abhoya, behold, the light is almost gone!” He pointed to the lamp, which the nurse hastened to refill. As soon as it burned again brightly, the master vanished. The door closed; the latch was affixed without visible agency.

Abhoya’s ninth child survived; in 1935, when I made inquiry, she was still living.